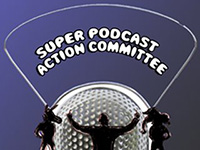 In Episode 27 of the Super Podcast Action Committee hosts Andrew Eisen and E. Zachary Knight talk about the 2012 presidential election – including some candidates you may not have heard of because the media has done its best to ignore them. They also talk about Barack Obama’s and Mitt Romney’s past statements on video games, net neutrality and other important issues that impact internet users and gamers… It can’t hurt to listen to this show before you go and vote on Tuesday, November 6.

You can also find us on Facebook (where there’s an app that will let you listen to the show), and on Twitter @SuperPACPodcast. You can send us feedback on the show by dropping a note to [email protected]

Credits: The Super Podcast Action Committee is hosted by E. Zachary Knight and Andrew Eisen, and produced by James Fudge. Music in the show includes “Albino” by Brian Boyko and “Barroom Ballet” by Kevin MacLeod. Both are in the public domain and free to use.