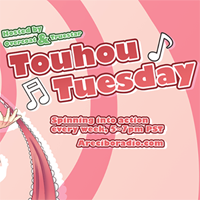 Wow! Today’s episode is the 1 year anniversary episode of Touhou Tuesday! I got a record amount of listeners to show up for the live broadcast, the chatroom was insane, there were prize giveaways, fanart drawn, pretty much it was just a good day okay. To celebrate, I played an entire playlist of Shibayan! An unfortunate side-effect of this is that the show became 3 hours long, since every Shibayan song is at least 8 minutes long for some reason. That’s okay though. It’s a celebration! Some highlights: Nugget bark overload, Virt mooning the audience [thankfully over radio this doesn’t work!], giving away all of teezan’s stickers, and Leo giving away a signed copy of his book, which you should totally buy! I had a pretty great year doing this show, so here’s to another year! Check out the playlist below:

yana – Fall in the Dark